Larry Clark was born in Tulsa, Oklahoma in 1943. Between 1963 and 1971 he took photographs of the sexual activity, drug use and violence which his friends in Tulsa experienced regularly. The resulting book, Tulsa, was published in 1971. Through later works like Teenage Lust, he continued to turn a highly sympathetic eye to the impulsive, self-destructive drives to which teenagers continually throw themselves. As a way to transmit stories through a different medium, from the late 1980s until the 1990s, Clark helped to make various films, and in 1995 he released Kids, his debut film as a director. Films such as Bully (2001) and Ken Park (2002) would follow, and in 2012 he released Marfa Girls. This film was first screened in public at the 7th Rome Film Festival, where it won the top prize, Marc’Aurelio Award (2012). After that, the film was distributed through Clark’s own website. Clark’s main solo exhibits include “Kiss the past hello,” Musée d’Art Moderne de la Ville de Paris (2010), “Larry Clark: Tulsa, 1963-1971,” Maison Européenne de La Photographie, Paris (2007) and “punk Picasso,” The Watari Museum of Contemporary Art, Tokyo (2004). 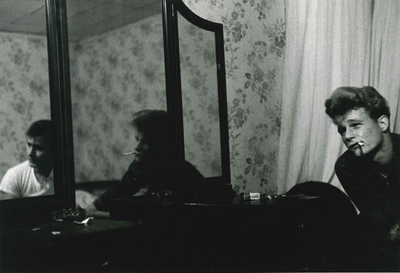