This work takes articles of clothing, which have traveled far from their origins to arrive in Japan, as immigrants. The exhibited items are produced by safety pinning pieces of used clothing produced in various nations and imported to Japan. The tarpaulin clothes covers are printed with photographs shot of clothes laid flat in okiga format. Okiga is a way of photographing clothing unworn and laid on a flat surface. Okiga has long been used in Japanese fashion magazines and its history harkens to 1868. Western clothing was first imported from Europe primarily on the Meiji Emperor’s instructions for Japanese citizens to Westernize their dress. Later, in 1945, GHQ Occupation brought American quotidian culture into Japan, and Western clothing was adopted generally.

While assembling a traditional Japanese outfit only requires the selections of one main item of clothing and accessories, Western clothing requires multiple items to be chosen. The okiga style of shooting clothing items was developed specifically for suggesting Western clothing ensembles in fashion magazines. The safety pins used to suture the pieces of used clothing references the wearing of safety pins by those in Europe and the US to protest hate crimes perpetrated against immigrants and minorities after the US presidential election of Donald Trump and the decision for the UK to leave the EU.

The work thus overlays the temporal context of various historical periods and cultural elements assembling and mixing to produce new identities, and the postwar history of Japanese fashion, which has produced its own legacy by importing foreign cultural elements. 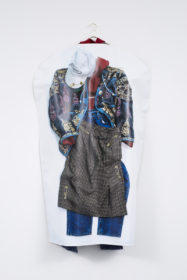 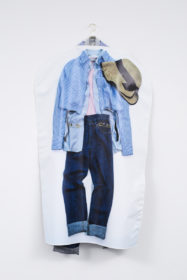 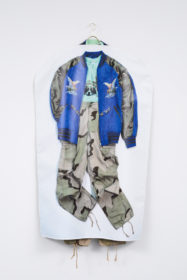 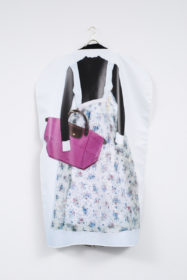 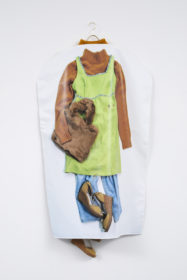 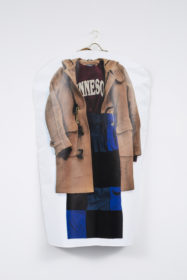 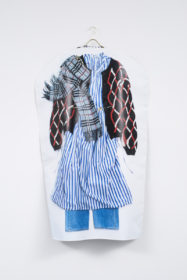 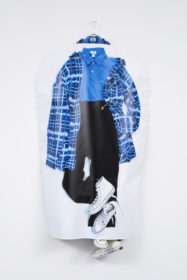 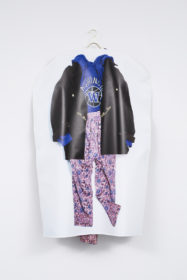 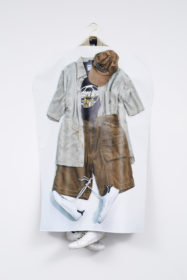 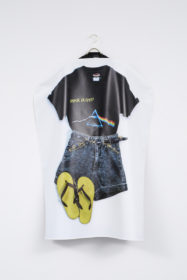 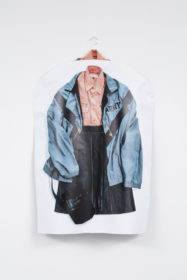 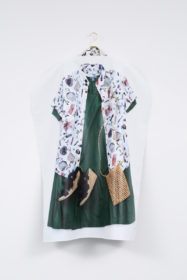 Never Lonely Shirts
Each Never Lonely Shirt is unique and made of used shirts.
Two shirts are layered and the right side of the chest is sutured with a safety pin.
—
year: 2020
material: Used shirts, safety pin, eyelet
Sizes variable
—
11 variants total | JPY 75,000+tax, each 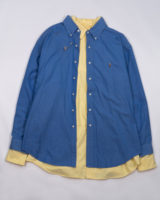 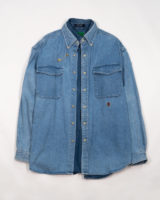 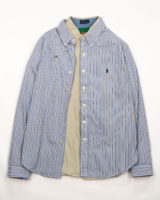 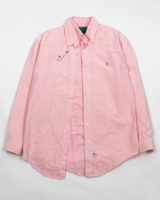 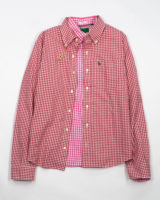 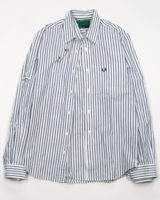 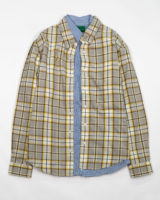 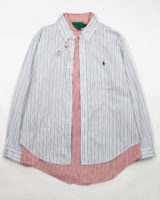 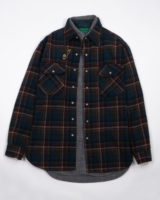 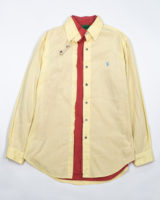 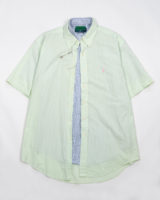 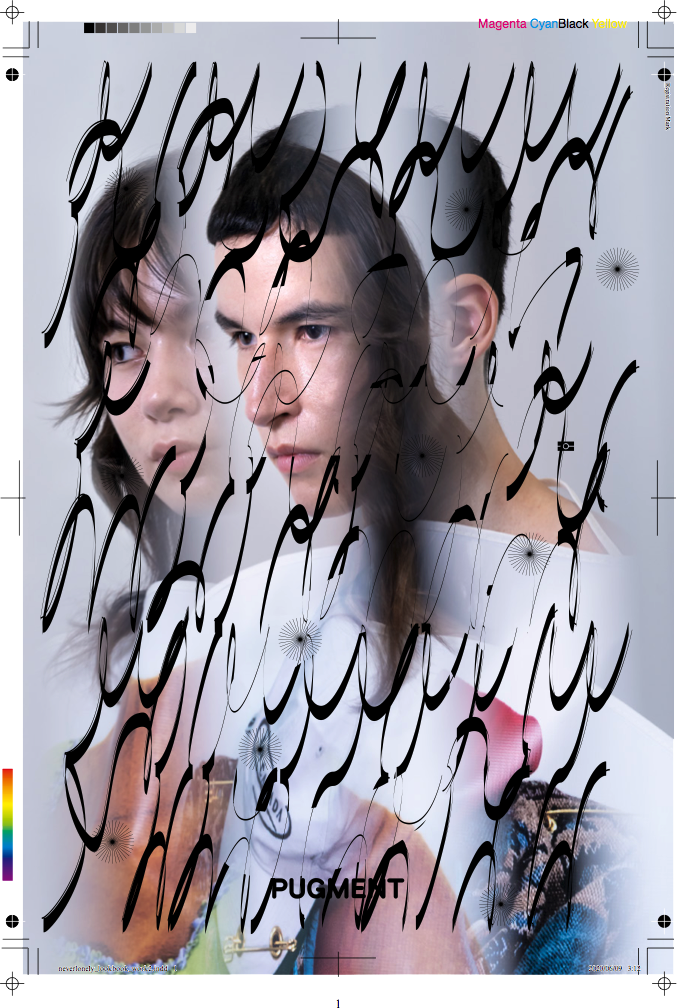 Many of PUGMENT’s works begin with observations of contemporary vernacular clothing and are based on careful research focusing on the histories and transformations of Japanese culture and clothing, as well as the relations between city, clothing, people, and society. PUGMENT has consistently released its collections using various media such as photography, video, and performance. Its MAGNETIC DRESS (2014) was made by photographing clothes found on the street with an iPhone, and printing the photograph onto a readymade and identically shaped clothing item. IMAGE (2016) comprised clothes made with ashes from burnt used military clothing. For Spring 2018 (2017), PUGMENT cut out photographs of used military clothes culled from the internet, printed them on tarpaulin, and made clothes out of it. 1XXX-2018-2XXX (2018) featured clothes that evoked protective gear of a near future, the setting of a fictional post-apocalyptic narrative, in which humans are extinct and fashion becomes dependent on clothing with will and emotion. Purple Plant (2019) focused on the history of contemporary Japanese fashion, much of which has come out of Harajuku. All of these works pay attention to the way in which clothing is linked not only to fashion, but also sociohistorical contexts. Producing works that complicate the relations between the past and present, PUGMENT also addresses fashion’s cycles of consumption and trends, and their destructiveness. With an understanding also of the way fashion’s distribution systems work, PUGMENT has devoted itself to transforming fashion’s issues into creative, positive output instead of simply generating ironic, self-referential statements.
In May 2020, PUGMENT launched its “Pugment Books” project, in which items are designed, based on photographs and texts produced in the process of creating previous season’s collections, as if they were a book page. PUGMENT’s multi-perspective approach is evinced not only in its collections and other works, but also its exhibitions, which are held simultaneously in multiple places such as galleries, bookstores, and curated shops, and feature a variety of activities and production processes.

PUGMENT
A fashion label founded by Karin Imafuku and Masahiro Otani (both b.1990) in Tokyo in 2014. Through observation of the transformation process in value and meaning of clothing in human activity, we incorporate this spirit into the production process of their clothes. Focusing on the relationship between human and images concerning fashion, we create and exhibit clothing in order to find different viewpoints on existing values, environments, and information. Recently, we presented in “Photography and Fashion Since the 1990s” at Tokyo Photographic Art Museum, Tokyo, 2020. “MOT Annual 2019 Echo after Echo : Summoned Voices, New Shadows” at Museum of Contemporary Art Tokyo, Tokyo, 2019. “1XXX‒2018‒2XXX” at KAYOKOYUKI, Utrecht and n id a deux, Tokyo, 2018. PUGMENT collaborated with photographer Kenta Cobayashi on a performance at “Unseen Amsterdam” (2017). In May 2019, PUGMENT opened in Ebisu, Tokyo, “People,” a space that combines office, studio, and retail, where participatory workshops and other experimental activities are carried out.
PUGMENT.COM

We take all the necessary measures
in order to ensure the safety of visitors and our staff.